We are under a BLIZZARD WARNING for the next two days – not a watch, a warning which means it’s a pretty sure thing we’ll be getting a blizzard. Today the wind has switched to the south so the dog door can’t be open and a deep freeze will follow the blizzard. Gotta be sure the barn is locked up as airtight as I can get it.

So with a blizzard looming we all went to the grocery store. The ad came out last night so I thought this would be a good time to go – you know, for the bargains? Does anybody else want to whine about their hometown grocery store? Ours is HyVee and I’ll be glad to name it. Since they took over I have searched for things EVERY SINGLE TIME IVE BEEN IN THE STORE! It’s pretty funny, really – I’m going round and round looking up to read the signs – and so is everyone else! We keep seeing each other every round we make! If beer is on special, wouldn’t it be stocked and in plain sight other than the cases in the cooler? If 7up is on special, wouldn’t they have it? Why is the bread aisle nearly empty? Why is the milk dated today as the expiration date? Enough whining – gotta let my blood pressure go down.

Here are the bullseye blocks that I’ve completed the first round – I need to cut more. 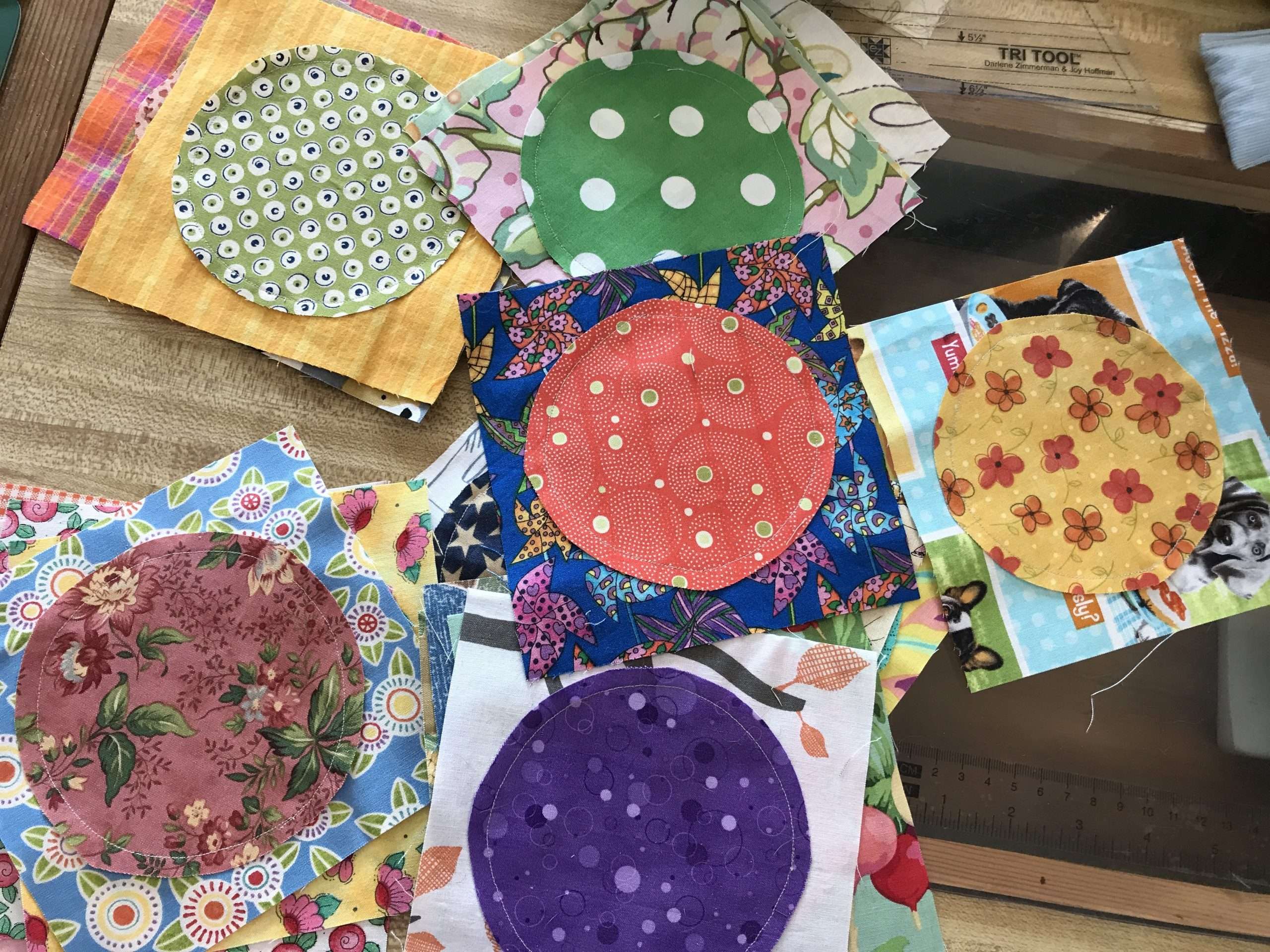 And all the sewing caddies are dusted and back on the shelf! I did break one that I’ll need to glue. 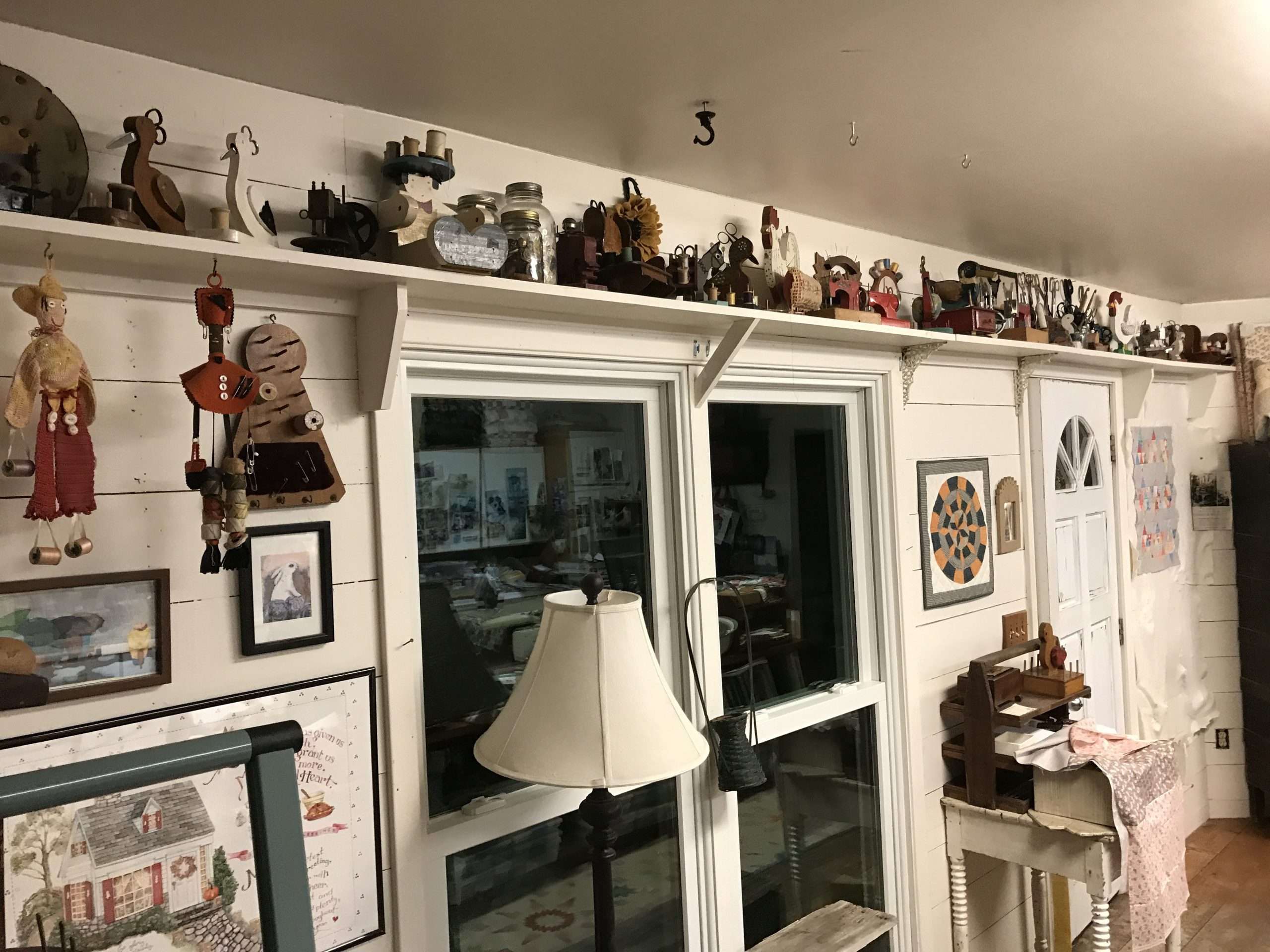 Don’t worry about that toggle bolt – it’s been like that for 10 years.

And all I had to do was bind my Number 9 – it almost felt like cheating! Jo has huge bed quilts she is finishing – I bound a 12″ block – I’m sorry, Jo – more power to you! I just loved looking at the quilts you’ve either started or have already finished. I recognized Kalissa’s Christmas present – would love to do that pattern! 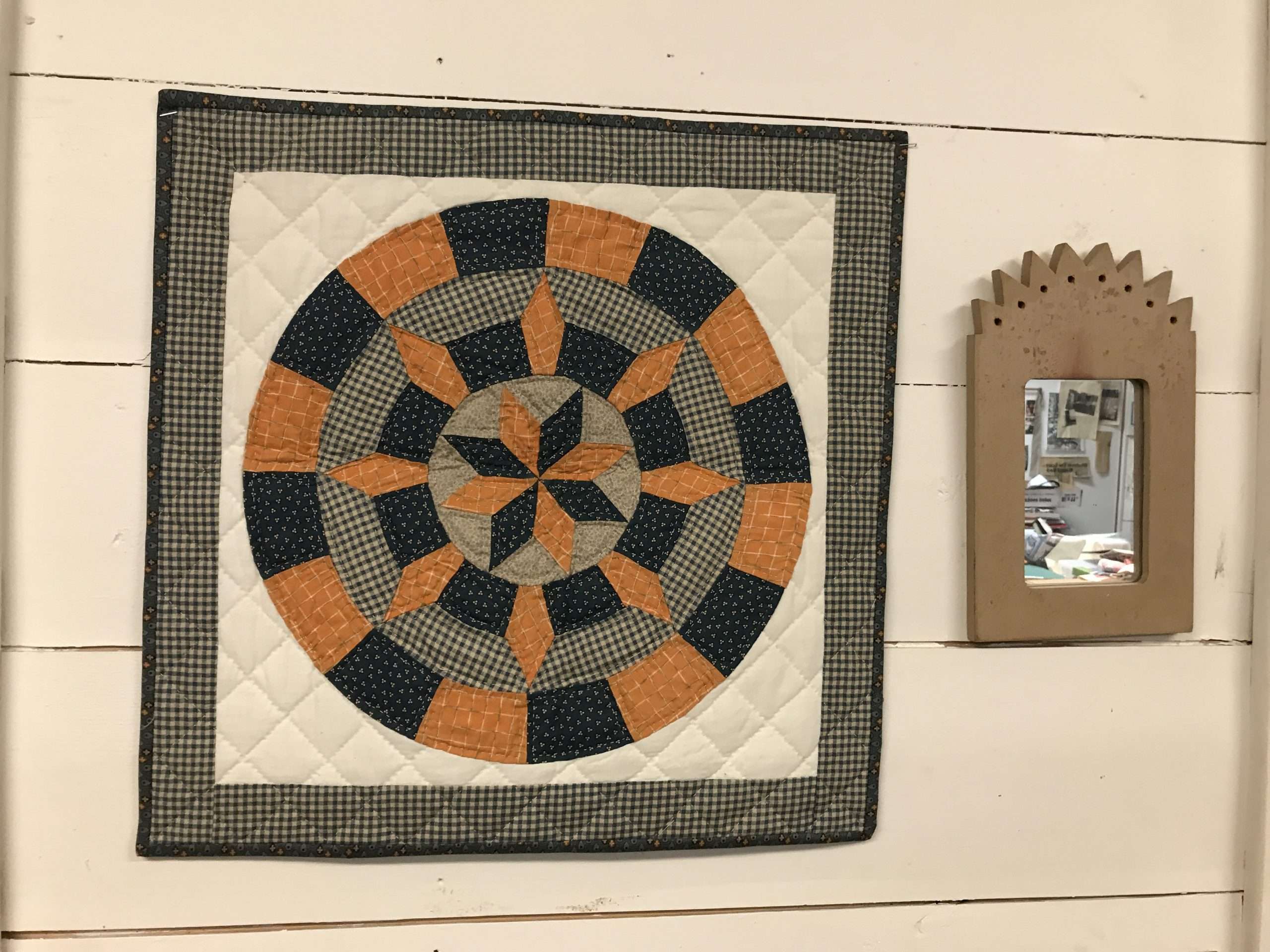 And here’s what I’m going to work on next – cake mix papers! Can you believe I have never done this before? Connie has and since I had a pad of Number 2, I found a pattern and started layering up 10″ squares. 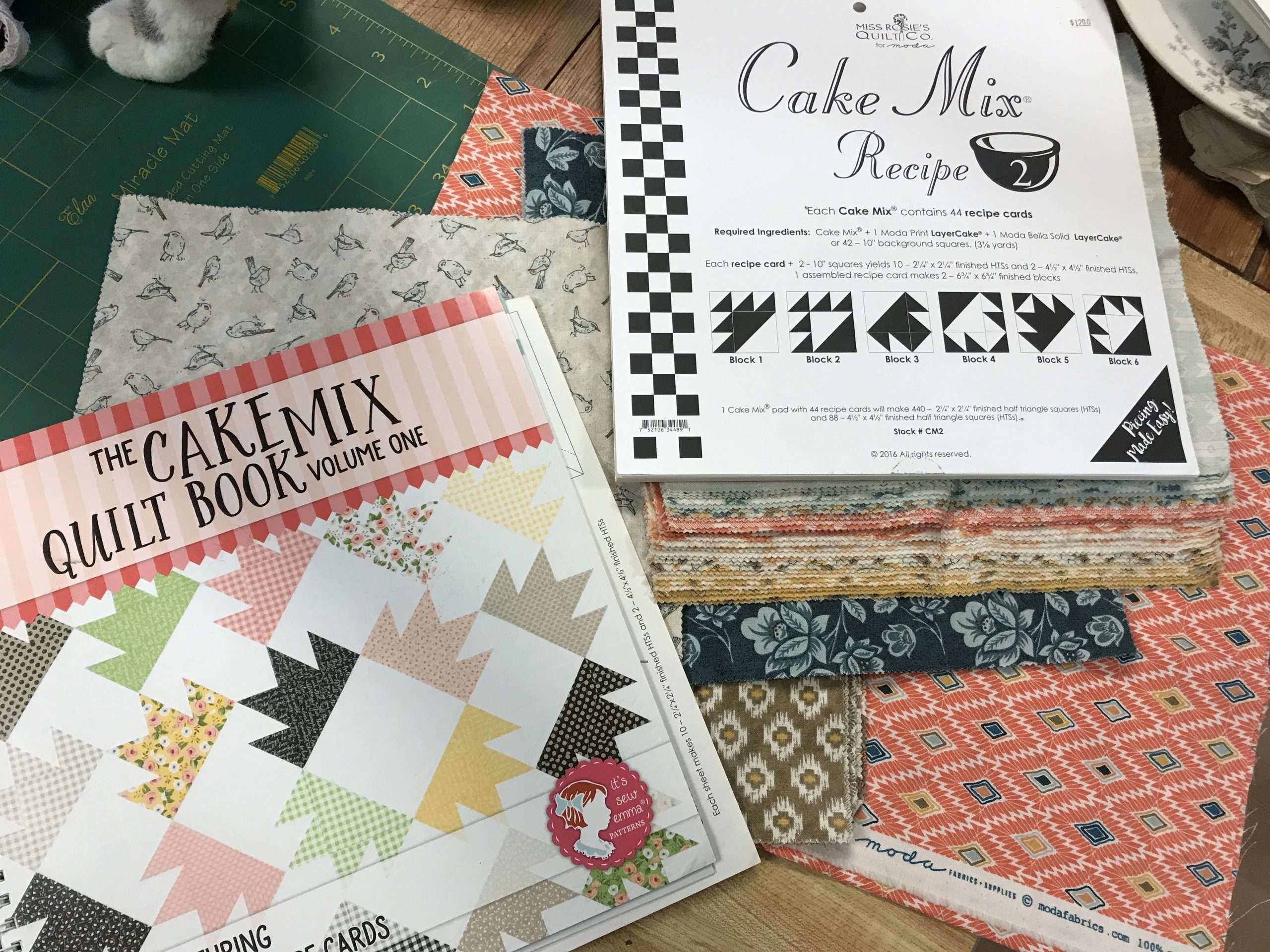 I also sewed up this Big Star quilt in red and white. This pattern is in the online store but it can be found many places – it’s one of those patterns that everybody has done and nobody can lay claim to having the original. 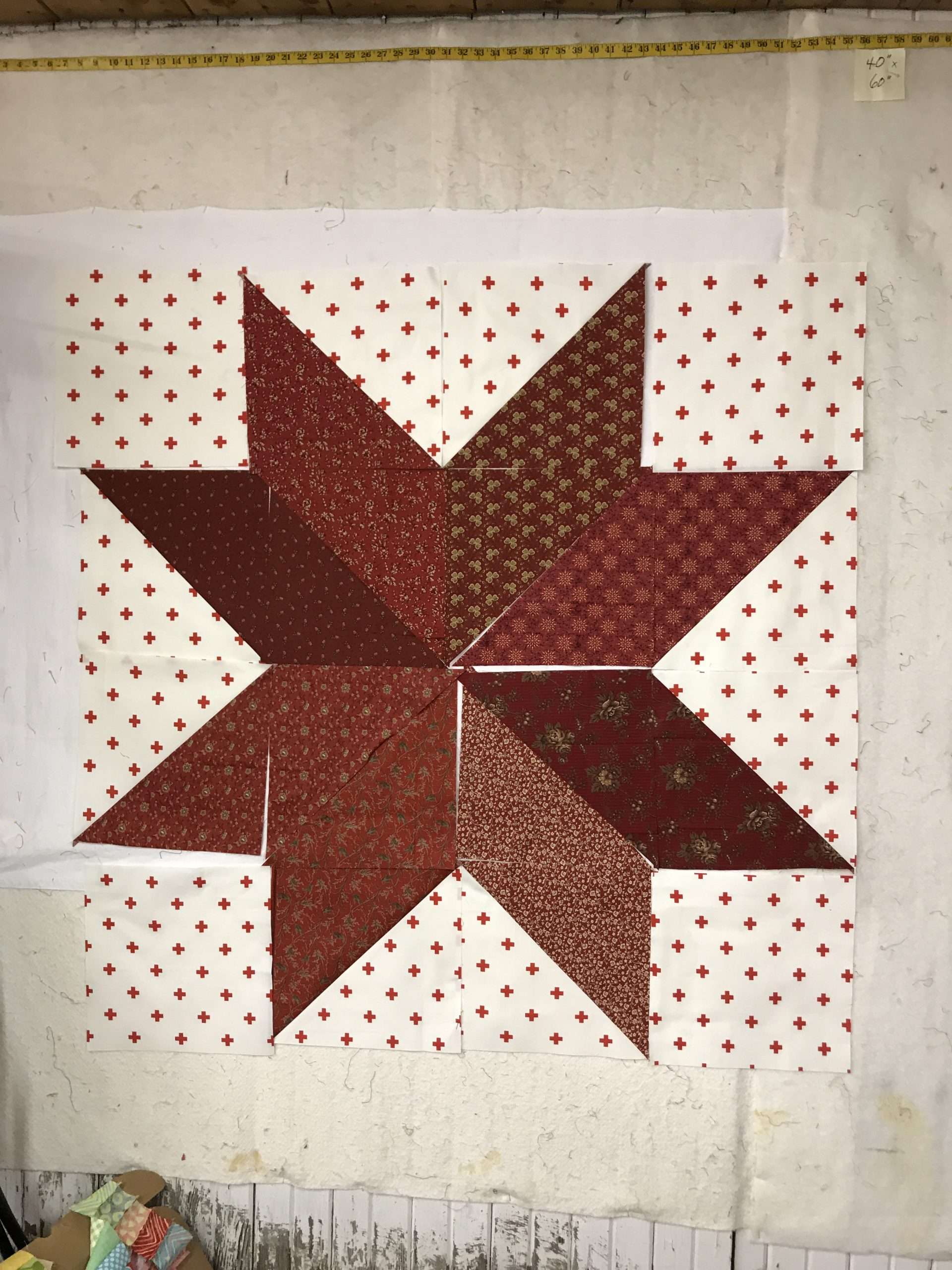 As I was putting sewing caddies back on the shelf I cleaned these two hand carved crochet hooks and admired this very long bladed scissors. 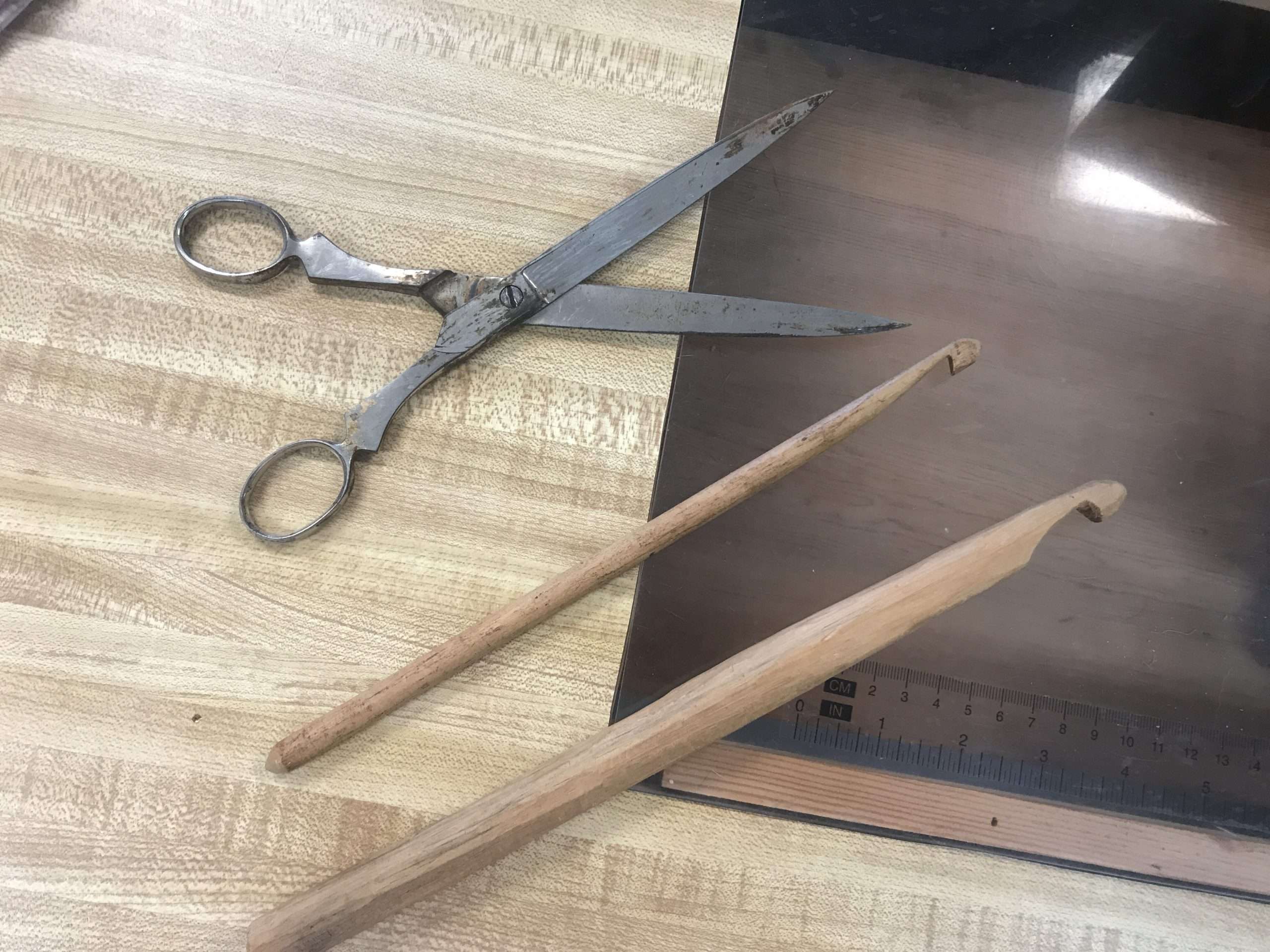 I still have a whole tray of tiny scissors to hang up.

This “leg” pincushion was on the shelf, too, and has several 1920 Red Cross pin buttons. It must be made of silk because it is deteriorating badly. 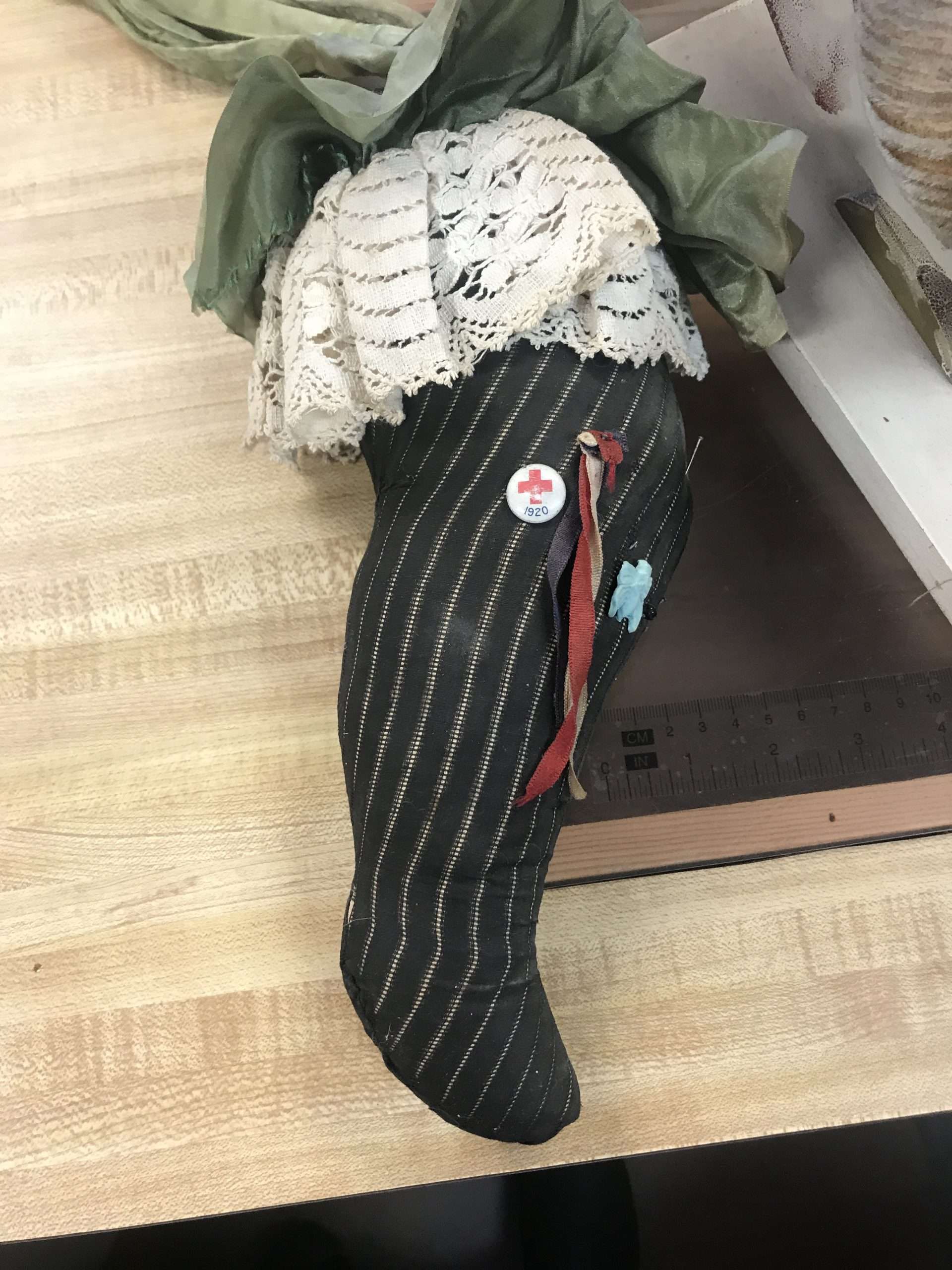 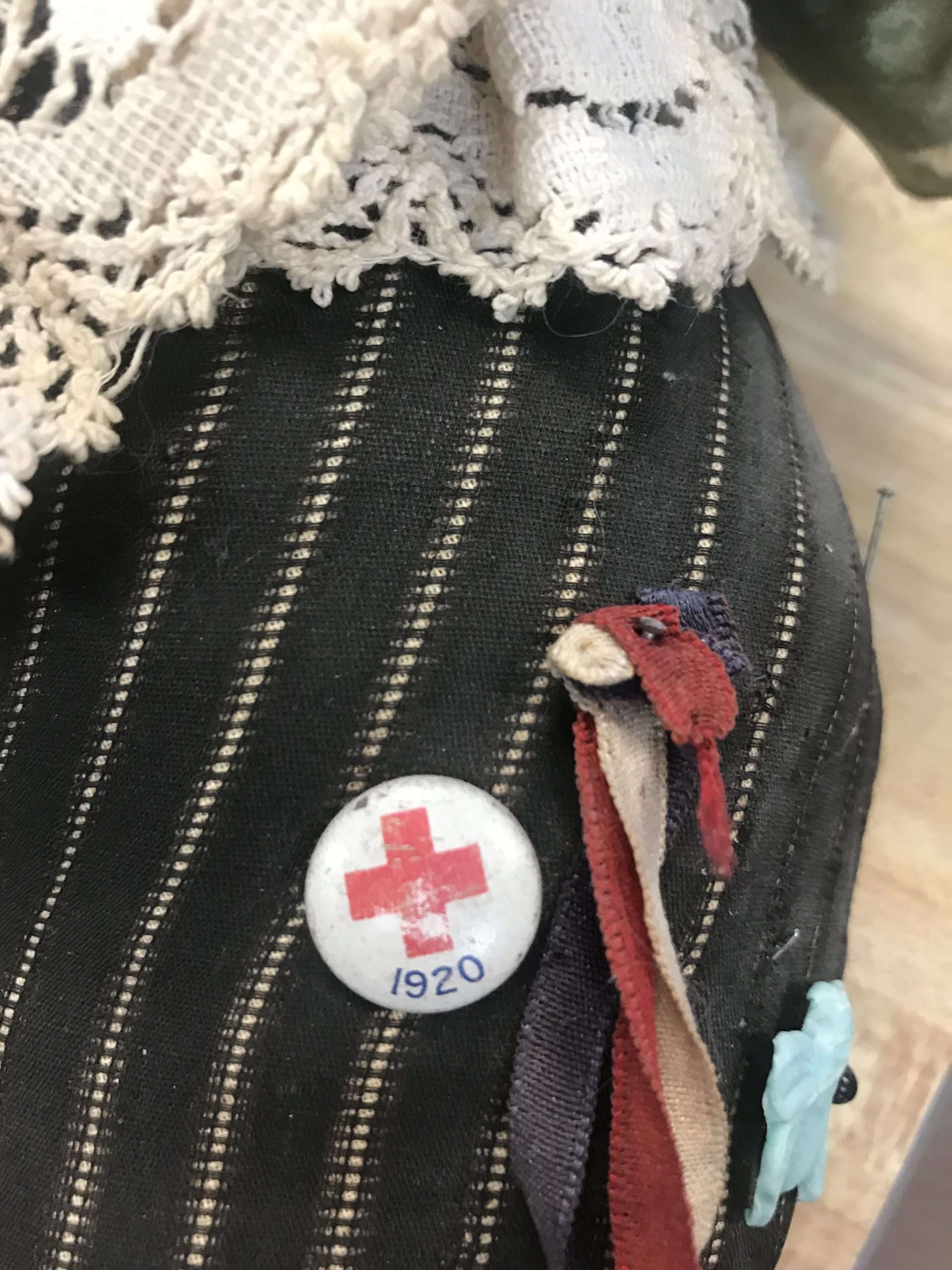 Yesterday after my dental appointment I went to Sue and Tony’s farm to meet their new puppy, Dougal. You might remember Sue used to work for us as a machine quilter and Tony now services our longarm machine. 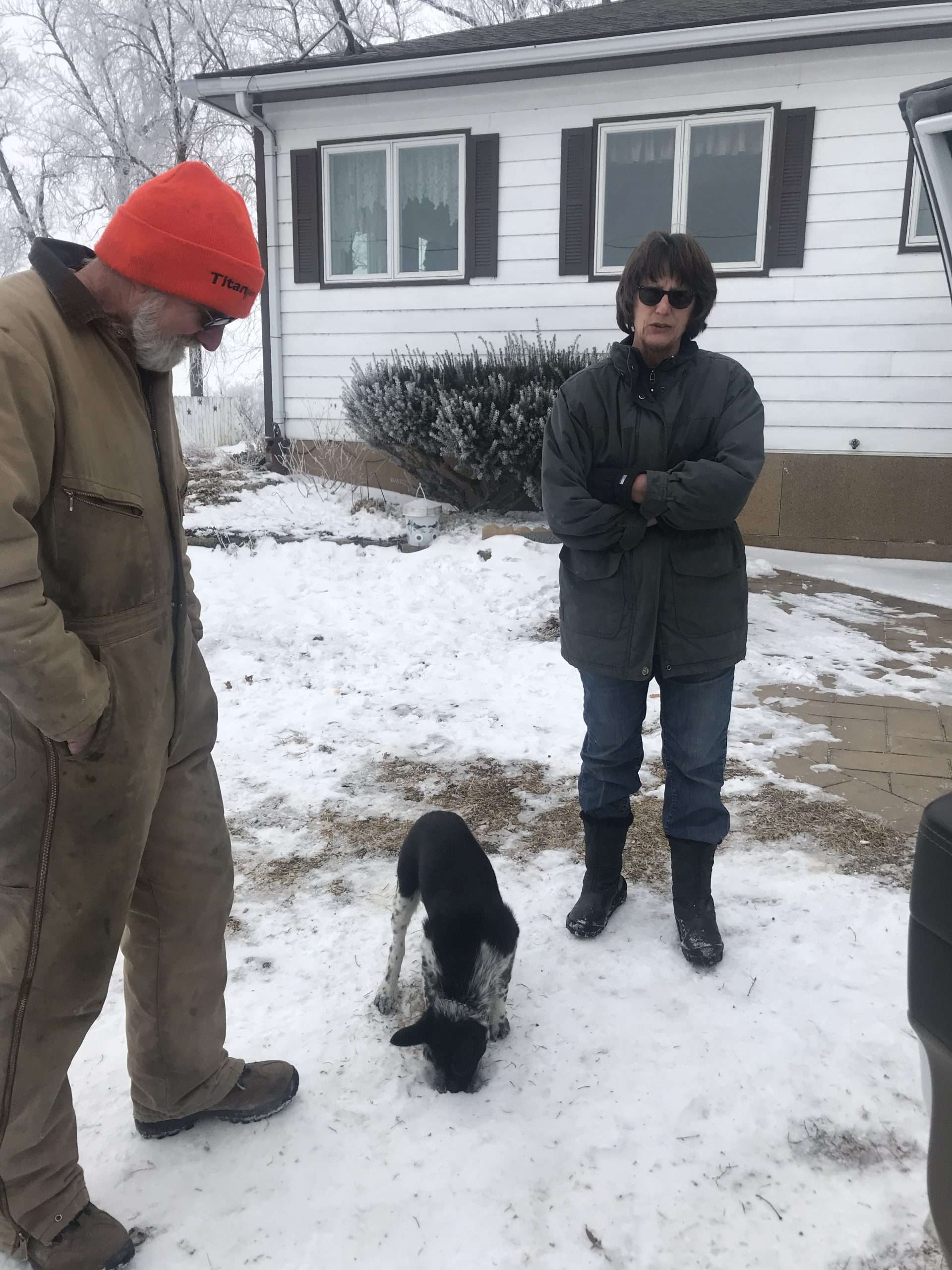 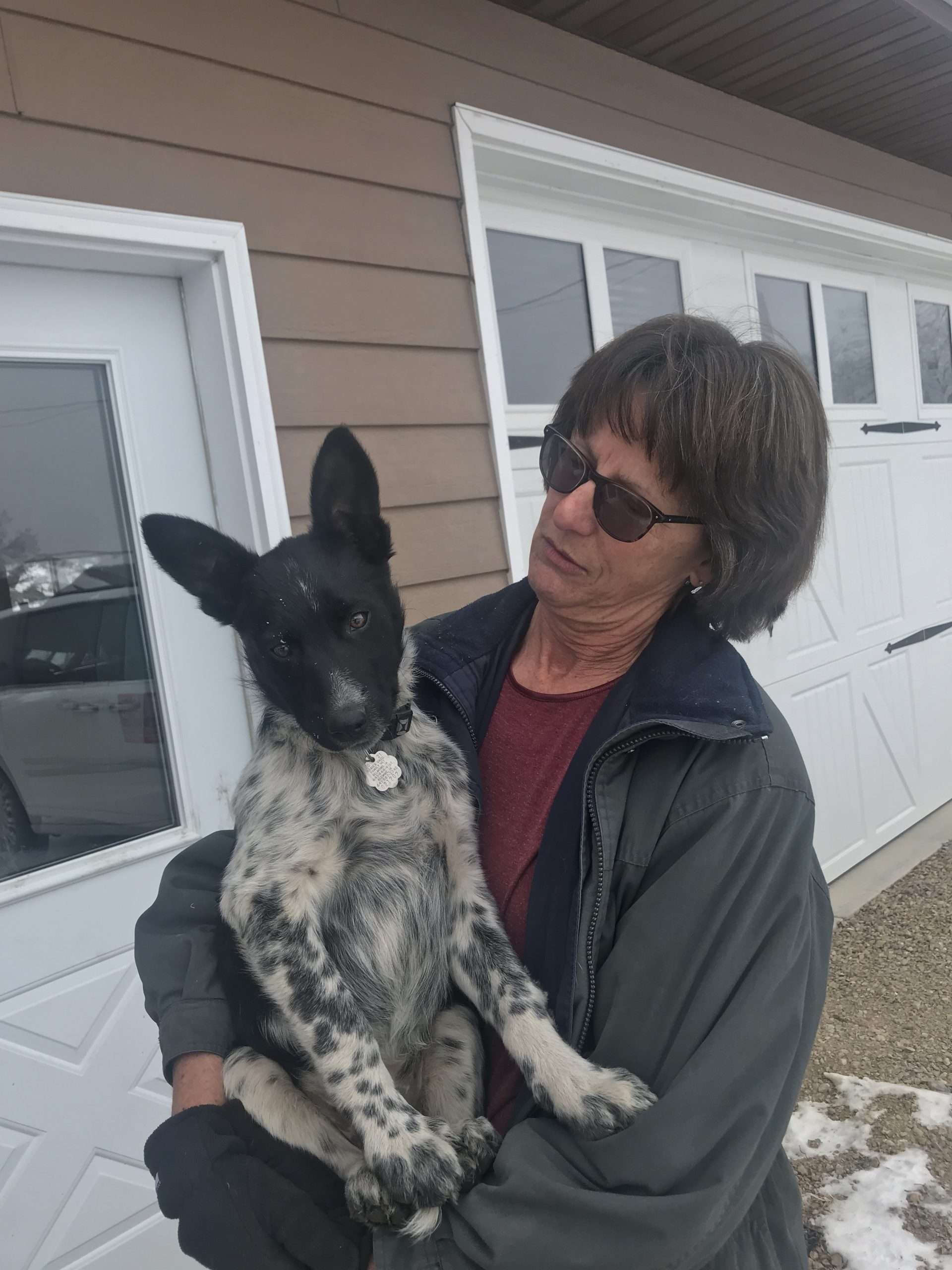 Look at how he’s sitting in Sue’s arms – and get a load of those ears!! Could he be much cuter? Love his spotted legs!

I hope I haven’t lost track of the Dirty Dozen pictures – I think I have just two. 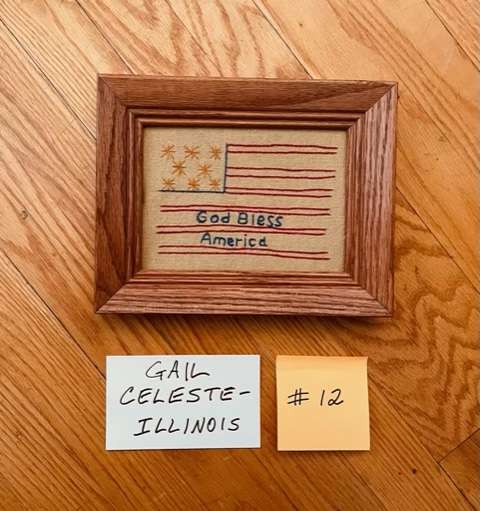 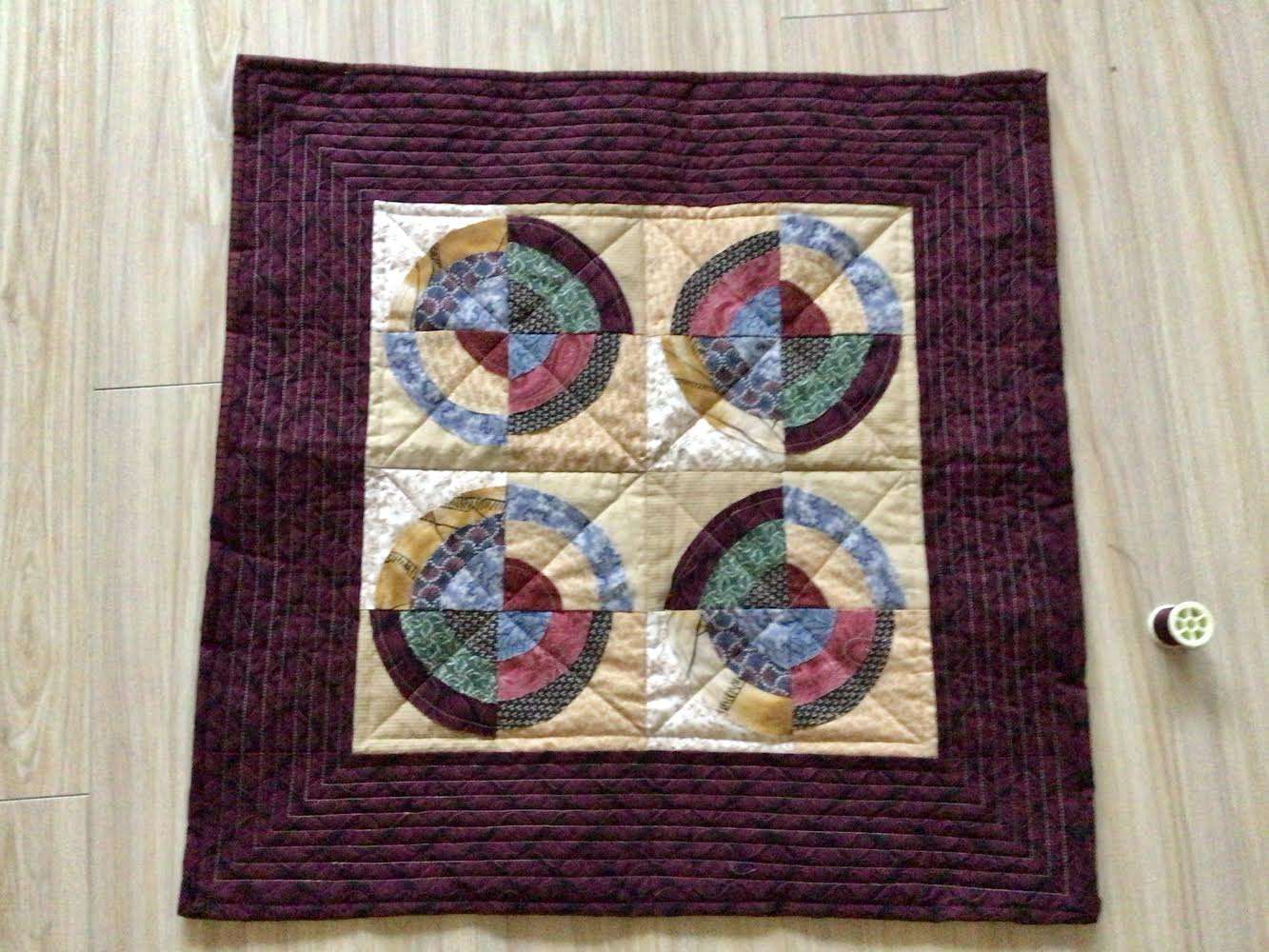 After I watched All Creatures Great and Small on Sunday night, I watched Long Song, the story about a sugar plantation in Jamaica at the turn of the century. It’s a short series, only 3 episodes but it deals with slavery and the wealthy plantation family.

So – I’m heading out to the shop to piece a back for my pink and gray quilt so I can get it on the longarm and Kayla can get the pattern in the shop. Let it snow – I can read and sew for days on end! How about you?